Posted on 24th February 2022 at 23:36
Once upon a time there was a little boy called Chris Voight, and just like other boys with a head full of brains and a heart full of ambition he had a big dream. Whilst all the other children dreamt of being astronauts, personal trainers in Hull or rock stars, little Chris knew, that the only thing in life that would give him meaning when he grew up, was if he became the head of the Washington Potato commission.
He knew that nobody was going to just give him this dream job, he’d have to dig in and work harder than anybody else if he was to achieve this dream, so he put in the hours, studied hard and through tenacity and drive he became the top man in the Washington potato world.
Chris should have been happy, sure, the envious stares of those he met gave him some satisfaction, and all the glamour and publicity that naturally came with the job was fun for a while, but when he got home at night and hung up his potato uniform, that’s when big Chris, for now he was a man, felt sad, and couldn’t help but cry into his hands all alone on his big, oversized potato shaped couch.
For all the effort he put into potato promotion, there was an evil force at work trying to demonise the tubers. They claimed that potatoes were evil, that spuds gave you a case of the “carbs” and made all the nasty “insulins’ come and get ya, and the worst of it all was that people believed this nonsense. Sales of King Edwards were falling, nobody desired the Desiree, the low carb pied piper prince had left town with all the Maris Pipers.
But Chris didn’t spend ten years at Tuber Town University for nothing, he had grit and determination, so he set out to show the world that not only was the potato non-fattening, but that it was actually very very healthy.
He publicly announced to his millions of fans across the globe that he would eat nothing but twenty potatoes a day for sixty days, that’s eight whole weeks. 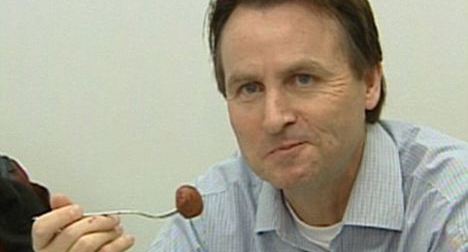 Ha, you’ll get so fat from all the carbs and the “insulins” cried Gary Taubes, those starchy potatoes will raise your cholesterol and make you so unhealthy that this experiment will backfire, and everybody will see how evil spuds are and keto diets will have even more converts. Atkins and Noakes laughed and raised a glass of Paleo Pepsi.
But Chris Voight ignored all the naysayers, he knew what he was doing, and he stuck to his spud guns and wolfed down twenty potatoes a day for eight weeks, and do you know what happened to Chris Voight?
He lost twenty-one lbs in weight, his cholesterol and triglycerides dropped considerably and even his resting blood glucose improved, yes, a high carb diet for an extended period improved his resting blood glucose.
The truth is that Chris knew what he was doing all along, whilst attending Russet academy he learned of the Danish Physician Mikkel Hindhede, who back in the 19th century, had a crazy little theory that potatoes could stave of a famine, to prove this he thrived on a potato diet for several months, with just a little milk and butter added, his conclusion was that “man can retain full vigour for a year or longer on a diet of potatoes and fat”.
This experiment was repeated later by Polish researchers Stanislaw Kon and Aniela Klein who went on a mostly potato diet (they also had a little fruit and coffee) for one hundred and sixty-seven days whilst maintaining an exercise program with full vigour and stating that their digestion was excellent.
Research shows that Population growth grew wherever potatoes where cultivated, as they provided more nutrients and calories per acre of land than other crops.

Reliance on this food was evident in Ireland in the mid 19th Century when around a third of the country subsided on a diet mostly of potatoes, and so it was that over a million people died during the great potato famine of 1845 to 1852 when a mould from North America wiped out entire yields.
Suffice to say, this everyday non assuming little vegetable, has a lot going for it.
Whilst potatoes don’t have a huge amount of protein (about 4.5g per average baked potato) the amount they do have is pretty bloody impressive, they have an amino acid profile comparable to whey protein powder and much better still than soy whilst also being plant based. They don’t quite cut it in terms of complete essential amino acids but have favourably more leucine (the main amino acid involved in muscle building) than soy.
Spuds are also a great source of vitamin C, zinc, B vitamins, potassium, and antioxidants, and they contain a decent amount of soluble fibre, about 5g.
Perhaps the biggest attribute of the potato is the satiety value, in 1995 Susanna Holt from the University of Sydney Australia ran an experiment to compare the effect of different foods on short term satiety and appetite levels.
She put together 38 different foods with a calorie value of 240 per portion, a wide range of foods was used including Mars bars, Yoghurts, Eggs various fruits etc. Volunteers would sample a portion of each food on different occasions and would then be asked to rate their hunger levels every fifteen minutes for two hours afterwards, then they attended an all you can eat buffet during which researchers paid attention to how many calories of food they ate.
After all that research, a satiety index was created, listing the effect various foods had on appetite, and guess which sexy little tuber came out on top? Step up non-Binary Potato Face, you win a prize, with a score of 323 (the next most filling food was ling Fish with a score of 225, so spuds won this contest by a long way).
Summary
I enjoy potatoes several times a week, not just for the above reasons, but also because they are delicious, cheap, and easy to prepare. I often have them baked, roasted, boiled, mashed or sliced thinly and cooked in a Moussaka or in dauphinoise sauce. I eat plenty of high carb foods, it probably helps that I do a lot of running, but in the past, I’ve also ate these foods whilst throwing weights around a few times a week and with zero running and still got lean enough for my abs to show through my t-shirts. But then maybe its just me, I yam what I yam.
The point is, that demonising foods based on misconceptions is foolhardy, just because potatoes are the main ingredient in crisp and chips doesn’t make them unhealthy, this same concept applies to many other foods also.
Eat healthy, enjoy food, enjoy life, only use your powers for good.
Tagged as: fitness, Gym hull, nutrition hull, Personal Trainer, Personal Trainer Hull, Personal Trainer North Ferriby
Share this post: