Should we all reduce sodium to lower heart disease risk? take this advice with a pinch of salt

Posted on 6th July 2022 at 16:46
Eight thousand years ago our Neolithic ancestors took a break from scratching their arse and making incoherent grunts to set up a thriving community in Romania, under the duress of a hot sun, and with no immediate obvious reward they put in the effort to build a mound three metres high, sixty metres long and twenty-five metres wide to harvest a precious commodity, salt.
Upon this mound, they utilized a local spring, which contained over six times the amount of salt found in Seawater, and using combustible materials managed to boil the water and harvest white gold.
Exactly what did they use it for? Nobody knows, perhaps for making food last longer, or to trade with other tribes, or maybe they just found their chips too bit bland with only vinegar on them.
Over the next few centuries and millennia, salt played a crucial role in the development of our civilisation, the word ‘salary’ comes from the Roman word for salt, but it’s unclear if people were paid in salt or if it refers more to its trading value.
Slaves were certainly traded for salt in Timbuktu, and entire Empires have been created and destroyed in some part due to salt.
So how has this valuable bad boy of the condiment world become demonized in modern times?
Its reputation is in tatters, now a cheap commodity we are warned to cut back on, blamed for 2.5 million deaths per year according to the Word Health Organisation.
There is a lot of confusion on salt in the health and fitness community, whilst most experts are strongly supportive of reducing salt intake, there are a few mavericks claiming that salt should be the least of our concerns.
As an evidence-based Nutritionist and personal Trainer, I wanted to explore the nuance a little more, because I believe that expertise lies in the deeper understanding of where something is applicable and why, and perhaps more importantly, where it is not a concern.
I’ll break this article down into three parts, in the first part I’ll cover the basics of salt, in the second I’ll cover the public health guidance on salt, and in the third I’ll try to cover the nuance, it’s in this last part I hope you’ll get the most benefit.

Part one, salt of the earth
A brief run down on salt, to help understand the terms and crux of the main arguments.
Salt is a reference to two elements, sodium and chloride, NaCI, an acid (chloride) and a base (sodium), it has a lot of interesting features that make it useful, a high melting point, good conduction of electricity, ability to soak up moisture, it’s impact on ice, salt is estimated to have over 14,000 uses, including the production of the computer you’re reading this on, and the clothes you’re wearing. Salt is abundant in the ocean waters we evolved from and in all live forms today, salt is absolutely essential for life on Earth.
When Scientist talk about the dangers of salt intake, they are really talking about sodium intake, to find the sodium content we need to divide the amount of salt by 2.54, so the current guideline to consume six grams of salt per day is aimed to limiting sodium to 2300mg. For ease of use, I’ll stick to the word salt throughout the rest of this article.
The main issue with salt is its effect on blood pressure, the amount of fluid pumping through our veins and arteries will determine the amount of pressure those blood vessels have to deal with. So, for example if you spent a day out in the garden working hard in the hot sun, didn’t drink much, and then sat down to relax with a few beers, you would probably become dehydrated, with less fluid pumping through your body, your blood pressure would drop. You might notice this if you got up quickly and suddenly felt light headed.
With me so far?
Now imagine the same scenario, except you’ve kept well hydrated throughout the day, and whilst deadheading your roses, you snack on some salted nuts bought to you on a tray by your stepford loving partner. They also keep the house tidy and always greet you with a smile after a hard day at the office.
So now you have a lot of fluid, and a lot of salt to help draw in that fluid through osmosis (fluid transfer by pressure gradient), which means your veins are pumped up in volume, now you have higher blood pressure than the first scenario.
It’s the difference between a garden hose dripping with weak water pressure and a fire hose blasting out so much water that two people are needed to control the nozzle.
Spend a few years consuming a high salt intake, combined with little inactivity and other lifestyle factors, and chances are you’ll develop high blood pressure (normal is 120 over 80, high is anything above 140 over 90) this in turn will result in much higher risk of death from cardiovascular disease.
When we’re talking about the risk of too much salt, we are really talking about the impact high salt can have on heart health (though obesity is also a risk factor) Let’s start with the public health perspective on salt.

Part two, salty seadogs of public health
For our awareness of this issue, we can thank Graham Macgregor, professor of cardiovascular medicine at Wolfson Institute of population health and honorary consultant at Barts and the London. Few people in modern times can claim to have saved as many lives as he has through his work and campaigning.
In the 1970s building on research of inhibitors in the Renin Angiotensin system (a group of hormones which help regulate blood pressure and inflammation) he was able to show that even a modest reduction of salt had a significant impact on blood pressure and therefore treatment outcomes for cardiovascular disease.
This was backed up further in wide scale research known as the inter-salt study, which looked at 10,000 men and women aged 20 to 59 belonging to fifty-two populations in thirty-two countries in African, the Americas, Asia and Europe.
After examining various factors, they were able to show that a very low salt intake resulted in low blood pressure.
Of particular significance in this study were the Yanomami Indians who consumed less than ½ a gram of salt per day, yet had very active lifestyles, walking many miles to hunt or gather firewood. All the people of this tribe had low average blood pressure (90 over 60 compared to 120 over 80 in the UK) which didn’t increase with age (defying believes in England at the time that this was just a normal part of aging).
So, with all this definitive knowledge you’d think it would be easy to make a big change in public health messaging and guidance to reduce preventable deaths right?
In the 1990s, a conservative government was advised on what action it would need to take to reduce one of the biggest killers at that time, heart disease. One action was to reduce salt intake, but because of pressure from the food industry the government backed down from taking any measures, and so it was the action on salt group was formed.
This eventually led to the food standards agency calling on industry to gradually make big reductions to their salt content over the next few years.
From 2004 onwards the food industry made gradual reductions of salt in their products, which backed up with a public information campaign reduced the amount of salt in the average person’s diet in 2008 from 9.5g to 8.1g, which resulted in approximately 6000 fewer deaths per year, saving about 1.5bn to the UK economy.
Alongside the fewer deaths, blood pressure dropped an average of 2.7 to 1.1 mmHg..
Current Guidance on Salt
The average consumption of salt in the UK right now is 8.1g per person, per day, the public health goal for the UK is to reduce this to 6g per day, although various experts agree that lower is better, suggesting 3g a day would be ideal.
But where does all of this salt come from?
As a very simple rule, the more processed food you eat, the more salt you’re likely to consume, if your diet is mostly healthy foods then it’s unlikely, you’ll be eating too much salt. In fact, it’s practically impossible, you would have to work really hard to overconsume salt on non-processed foods alone.
Salt in food is usually labelled according to a traffic light system, the following pic was taken from the action on salt website. 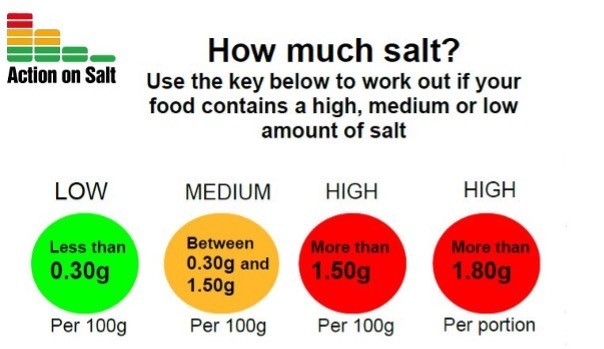 The main high salt culprits are listed below
Highly processed breakfast cereals
Bread
Soup
Cheese
Processed meat
Savoury snacks (salted nuts, puffed cereal etc)
Pickles
Canned vegetables
Sauces
Soy sauce
Stock cubes
Yeast extract
Olives
Gravy
Take aways
The above list leads me neatly onto the next topic.
Salt and obesity
The more salt in your diet, the more likely you are to be overweight, there are a number of reasons for this, the most obvious one being that increased salt will usually mean increased water retention, so bloating from water weight will account for some of the increase on the scales (there are some athletes who try to manipulate salt in order to make weight, it’s usually quite complex and few people ever get it right)
But most often we’re not just talking about an increase in water, we also mean an increase in fat and sugar, salt helps bring out the flavour in foods, at low levels salt reduces bitterness and enhances sweetness, at higher levels it reduces sweetness and increases umami (one of the five basic taste, the others being sweet, bitter, sour, salty).
As you increase salt you reduce thirst cravings and replace them with hunger cravings. Once you pop you just can’t stop as the saying goes, hunger signals get confused, it’s hard to over consume broccoli, but a pack of crisp just doesn’t seem to satisfy enough, easy to grab another one, maybe add dips, some cheese you say?.
Does lowering salt work?
The proof of all this salt research and the public health campaigns to reduce salt are in the data, which has shown time and time again that lowering salt consumption is an effective way to improve longevity, one of the few interventions which actually seems to work.
In the late 1950s, it came to the attention of the Japanese government that in the North of their country, they had onoe of the highest number of deaths from strokes in the world. Upon investigating, it became clear that they also consumed a very high amount of salt, mostly from soy. For the next decade, through public health information they managed to reduce salt consumption from 18g a day to 14g and saw a massive 80% drop in stroke mortality.
This came at a time when Japan was becoming more influenced by the west, and increases in smoking, alcohol consumption and fat intake also coincided with the reduction in stroke deaths and lowered blood pressure, suggesting it was the reduction in salt alone which helped improve health outcomes.
A twenty-year public health intervention study which took place in Finland from 1972 involved 14,000 men aged 35-64 and showed a reduction in fat and salt intake, an increase in fruit and veg consumption and a decrease in smoking, helped to lower cholesterol by 13%, diastolic blood pressure by 9%, and stroke mortality by 66%. Overall coronary heart disease deaths also fell by 55%. With the confounding factors, it was estimated about half of the positive health outcomes came from the change in diet and reduction in salt. 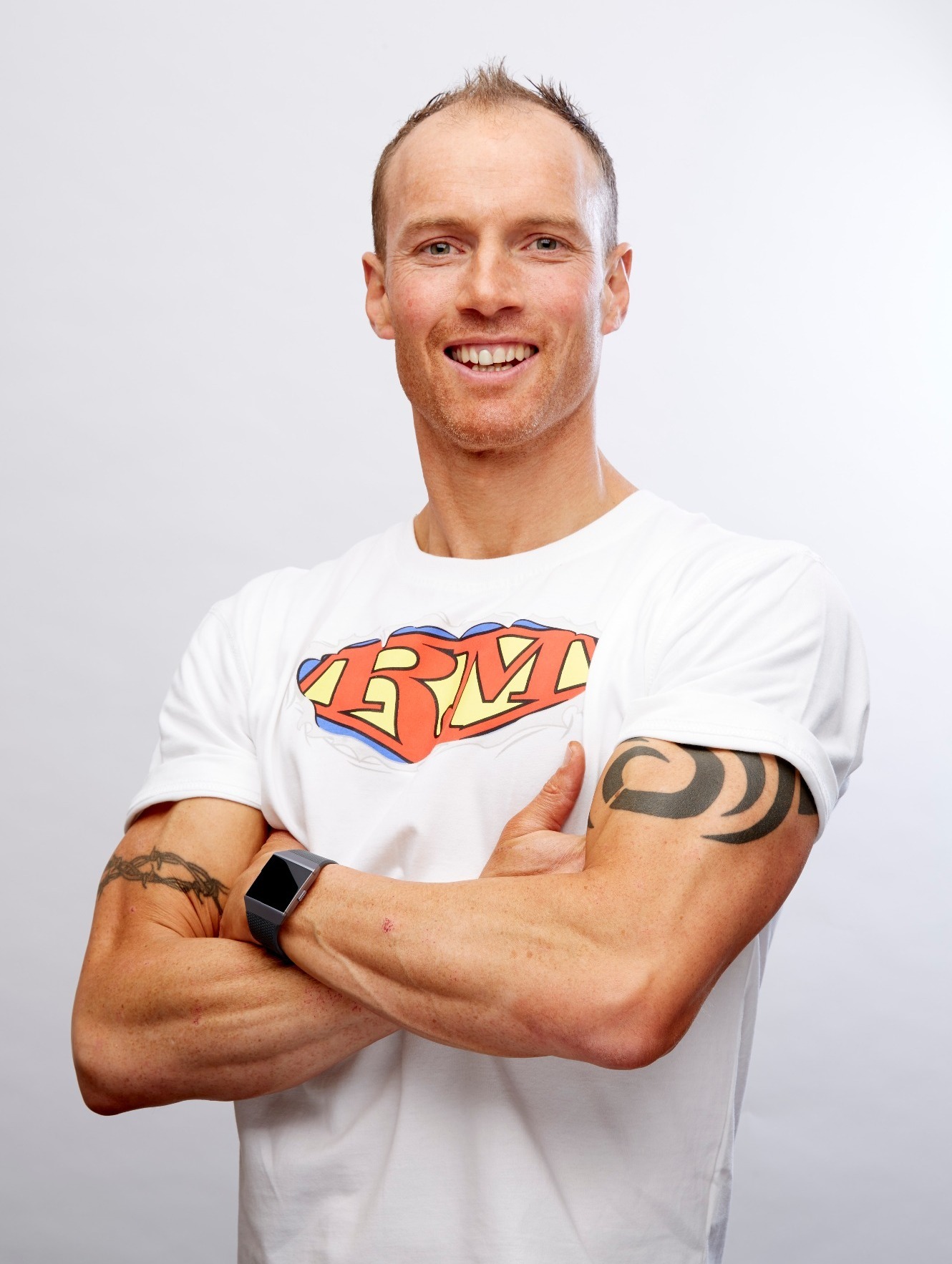