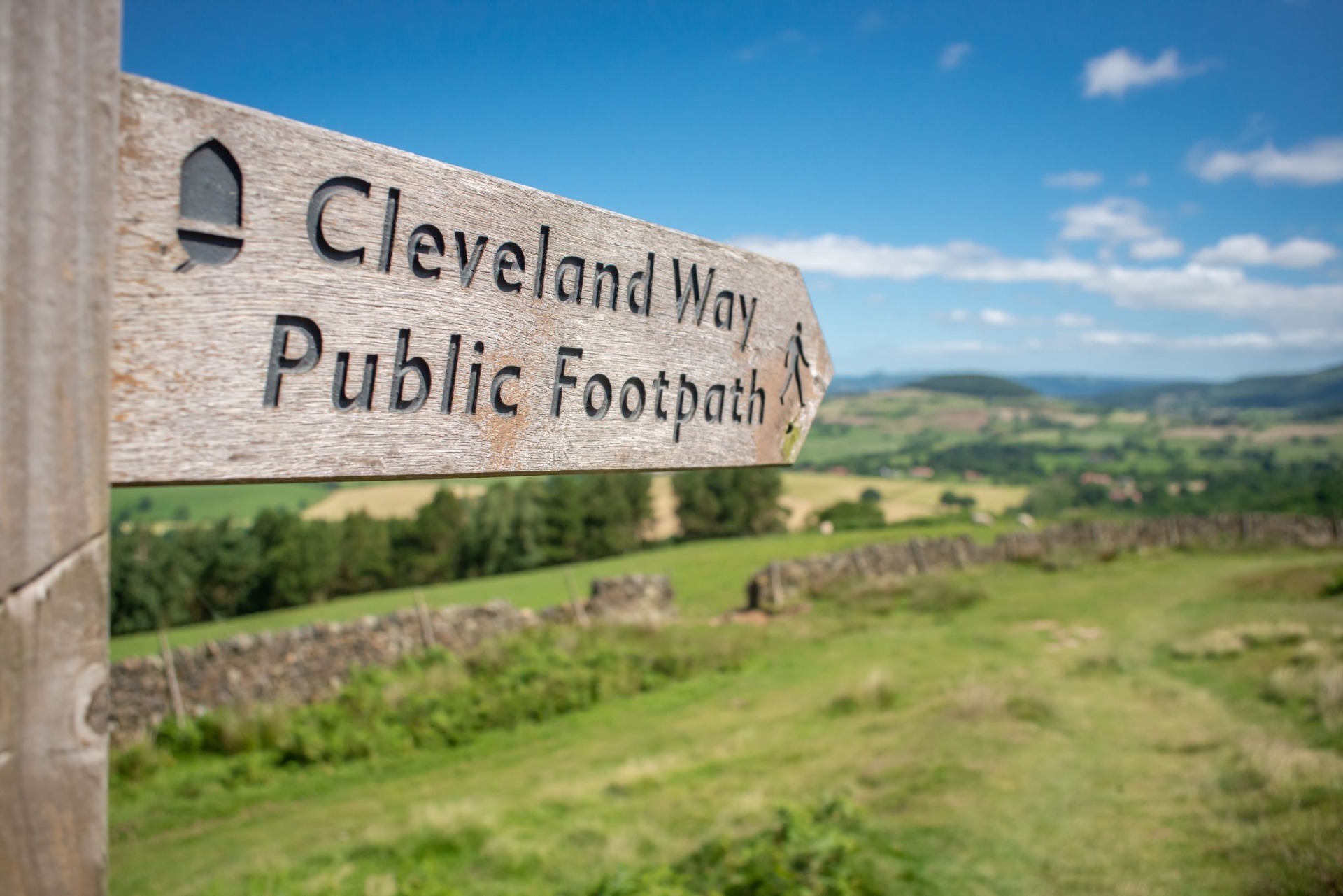 Posted on 16th September 2020 at 15:43
I wanted a challenge, and I got one!
On Saturday 22nd August at 8:03am I lined up with five other runners on the cliffs of Filey Brigg, a very scenic view on a morning with ideal running conditions, warm with a slight breeze. The Marshal counted down from ten, I pressed start on my Garmin Fenix Watch which already had the GPX route uploaded to guide me along the one hundred and ten mile journey ahead, he counted further down, 3, 2, 1 and then we all set off.
For many of us this was the first Ultra run of the year, due to Covid 19 restrictions all events had been cancelled, this event had gone ahead under the promise of strict safety procedures, including face mask on arrival at the start line, temperature checks, setting off in smaller groups of six every three minutes and at the finish line a one way system to collect medals before exiting and giving space for other runners to come in.
In this blog, rather than write a section by section account, which is mostly just a blur now, I want to cover the most memorable parts of the run and most importantly to me, the lessons learned and where I go from here.
Here are a few of the memorable highlights.
Injuries
This was only my second Ultra run, my first event on the Wolds way saw me finish with damaged feet and a lot of cuts and bruises, the Cleveland Way only left me with two injuries, both of which happened because of my own stupidity.
Injury One
About fifty miles in, whilst navigating a section of forest, my GPX watch decided to shout at me, “why the f*ck are you going this way Rich?, you’re supposed to be going up that muddy, slippy almost vertical ascent there”
“this steep treacherous climb with no path?” I replied, “are you sure?”
“don’t question me, I’m an expensive top of the range digital device used by top athletes the World over, if I say you need to go up there, then move your ass and get to the top of this ridiculously stupid hill”
So it was I climbed, slipped, climbed some more, got to the top after ten minutes, at which point my watch chimed in…
“what the f*ck are you doing up here you dumbass? The route is down there where you just was ten minutes ago when you were going in the right direction”
“but.. you said”
“get back on track you pathetic mortal, of all the owners in the World I get lumbered with you, why did Kilian Jornet have to choose a Suntoo instead of me”
I looked around, the route I just climbed was too steep to climb back down, a thick thorny only slightly less vertical descent was possible on the other side, I held onto a branch with one hand whilst using my poles to hold me steady with the other, and then I slipped and fell with such speed that my brand new telescopic pole snapped in half and my arse hit a stone which gave me such a bruise and cut that I can still see it ten days after the event (I’ll spare you the picture)
Injury Two
I continued on with only one pole for the next fifteen miles, ascending the beautiful but also very steep Roseberry topping hill, luckily for me, when I met Kev my support runner at mile 64 he had some spare poles which he lent me.
As we ascended the hill to Captain Cooks monument and continued into the night it became dark, head torch on, and then onto the Wainstones, a beautiful part of the North Yorkshire moors, the path was a little narrow, and whilst ascending a long gradually increasing ascent, I picked up the poles and just tried to hover them above the floor for a few hundred yards as it was difficult to place them.
At night time, when outdoors in the open, sound travels quite well, so when Kev heard a loud thud and some sharp curse words he was able to turn around just in time for his head torch to shine on me face down on a rocky path with my hands still clutching the poles and my knuckles about ten feet behind me. It was surprisingly painless at that moment, however I still have a big open chunk on my right index finger which is taking some time to heal. 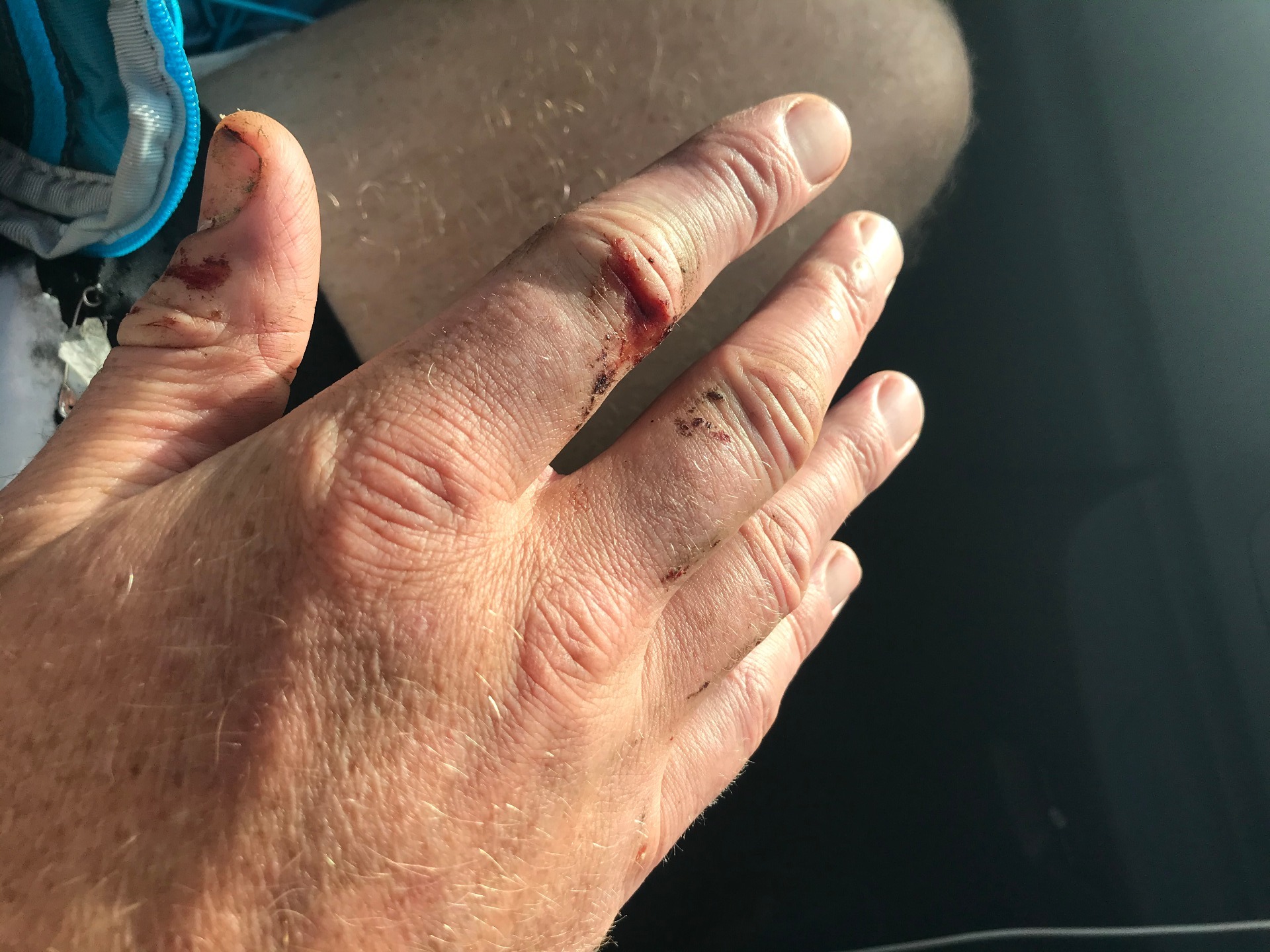 The Amazing View
The Cleveland way has some of the most spectacular views one can hope to admire, the first fifty miles along the coastline had me regularly taking in the stunning view of the cliffs, sea and various monuments and sculptures.
If you ever have the opportunity to trek the Cleveland way I’d certainly recommend it, the usual way is to start in Helmsly and work your way towards Filey over a week, taking in the views, stopping for Fish and chips and a pint. 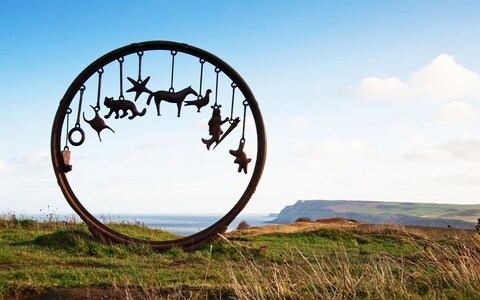 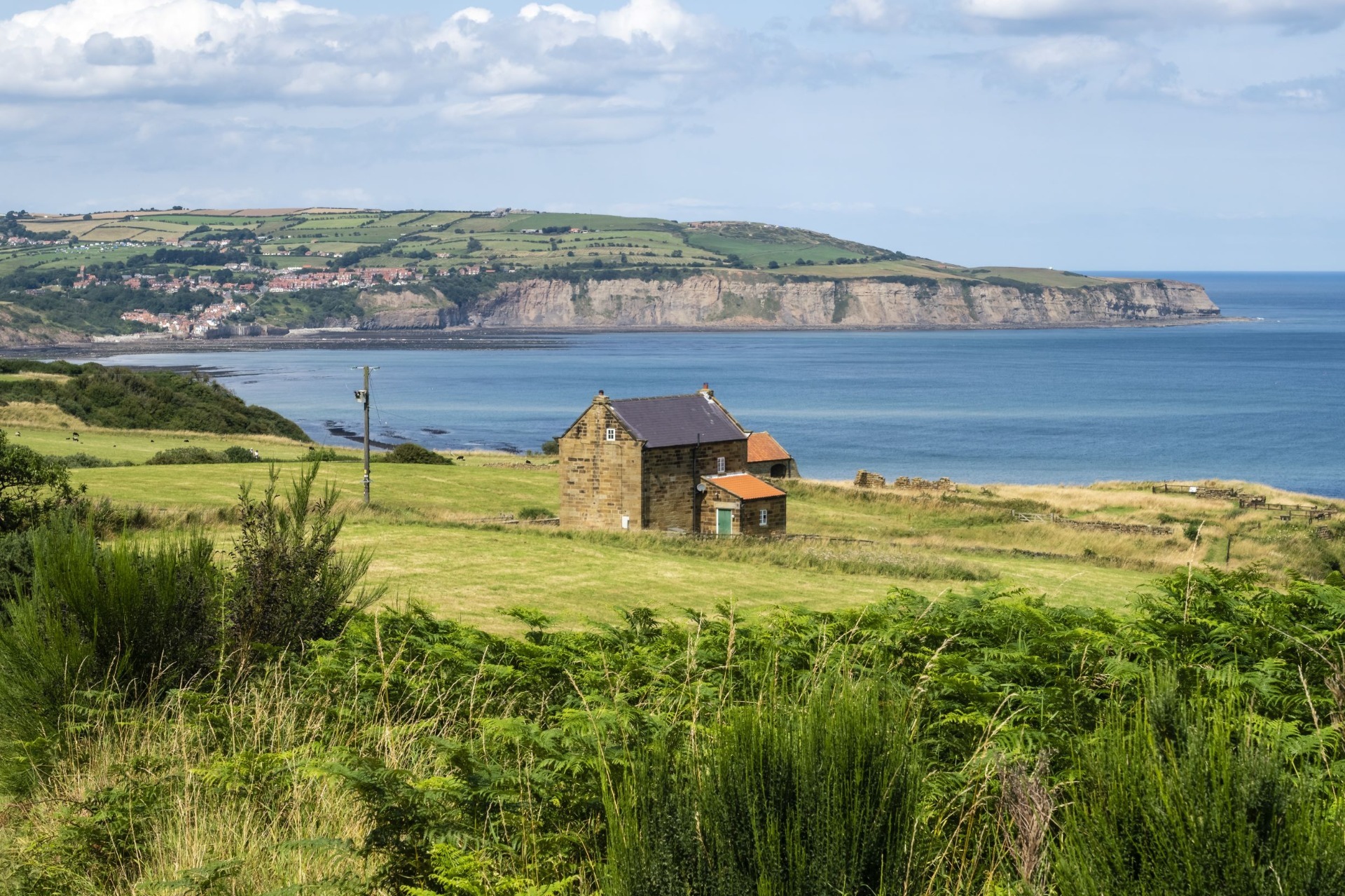 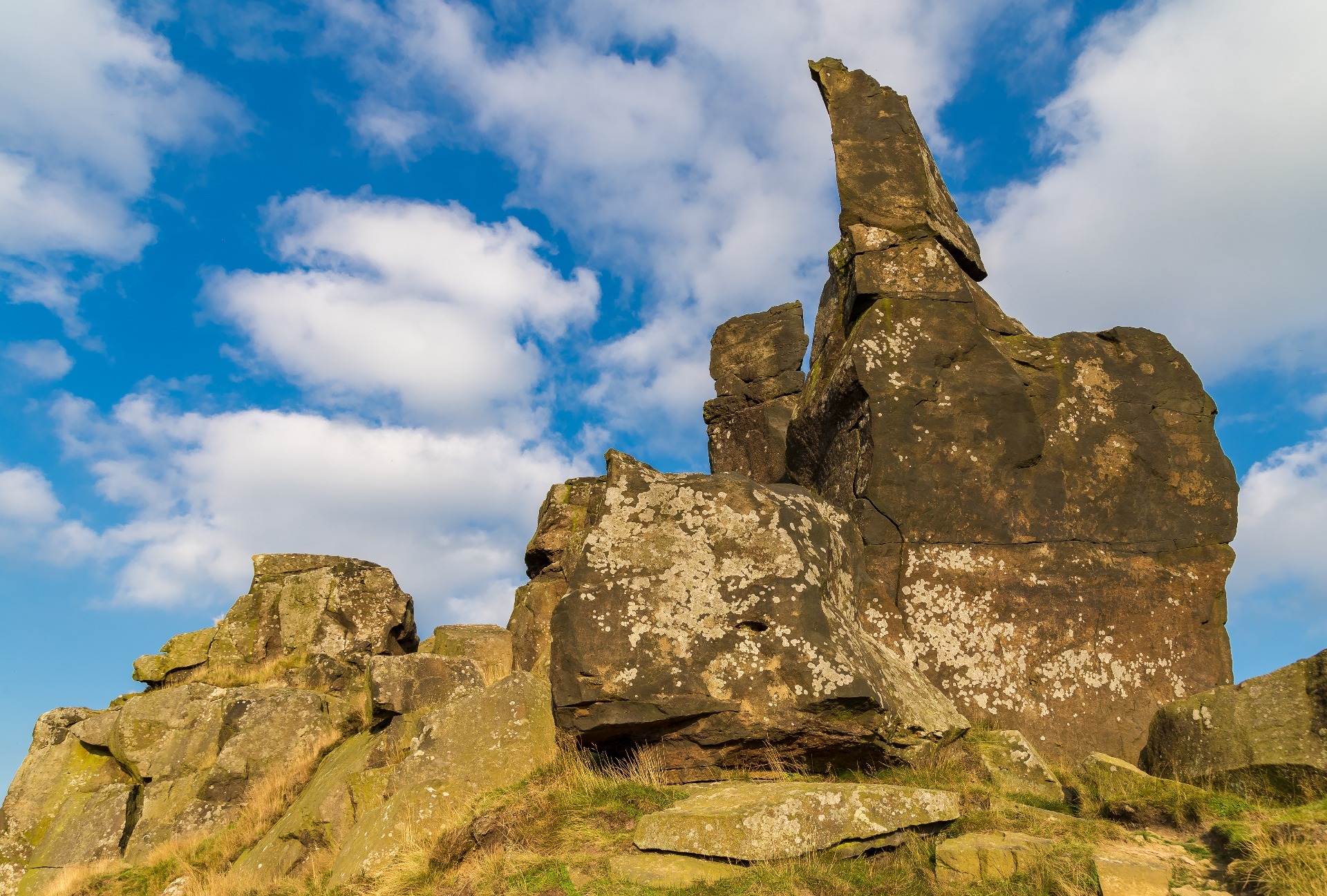 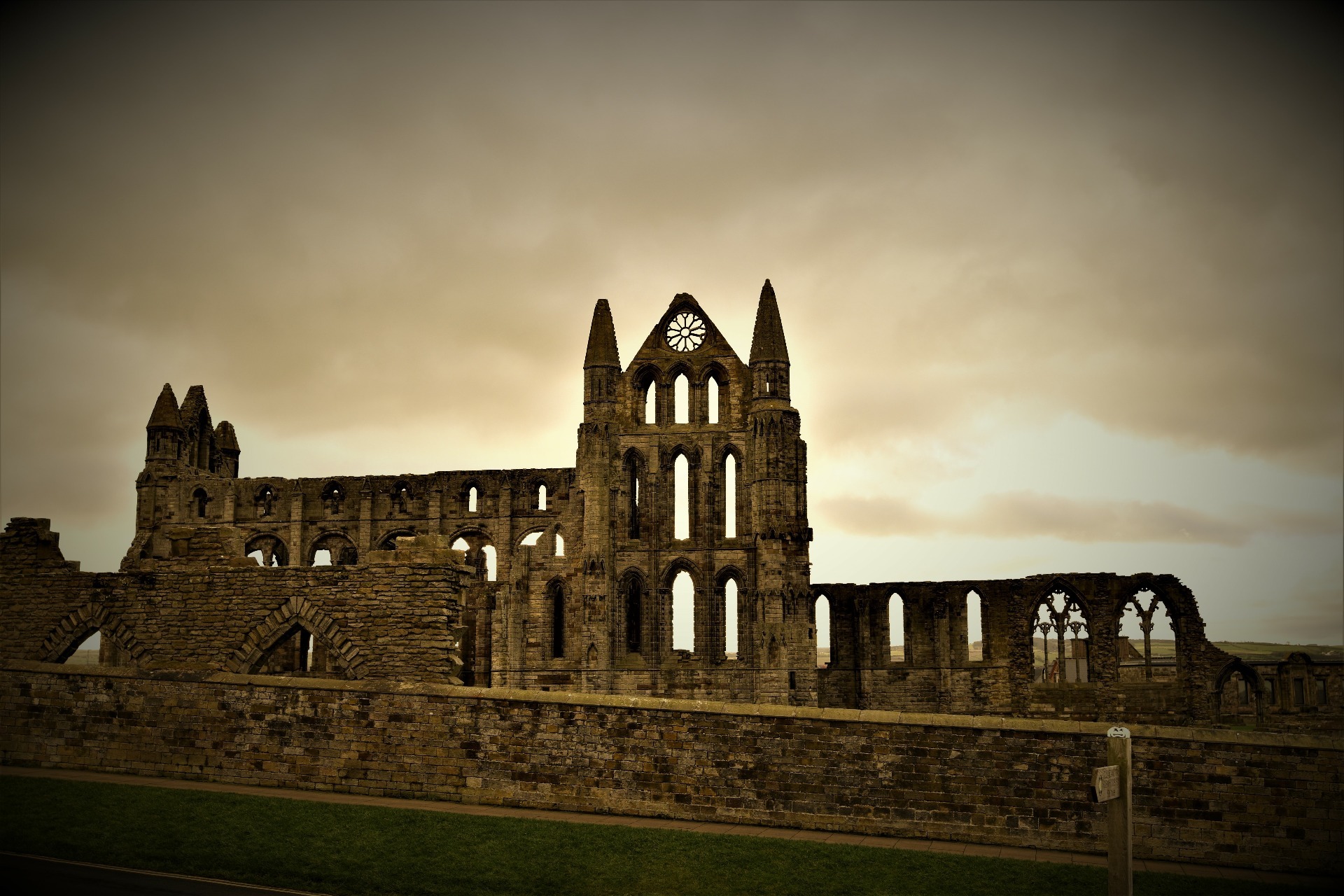 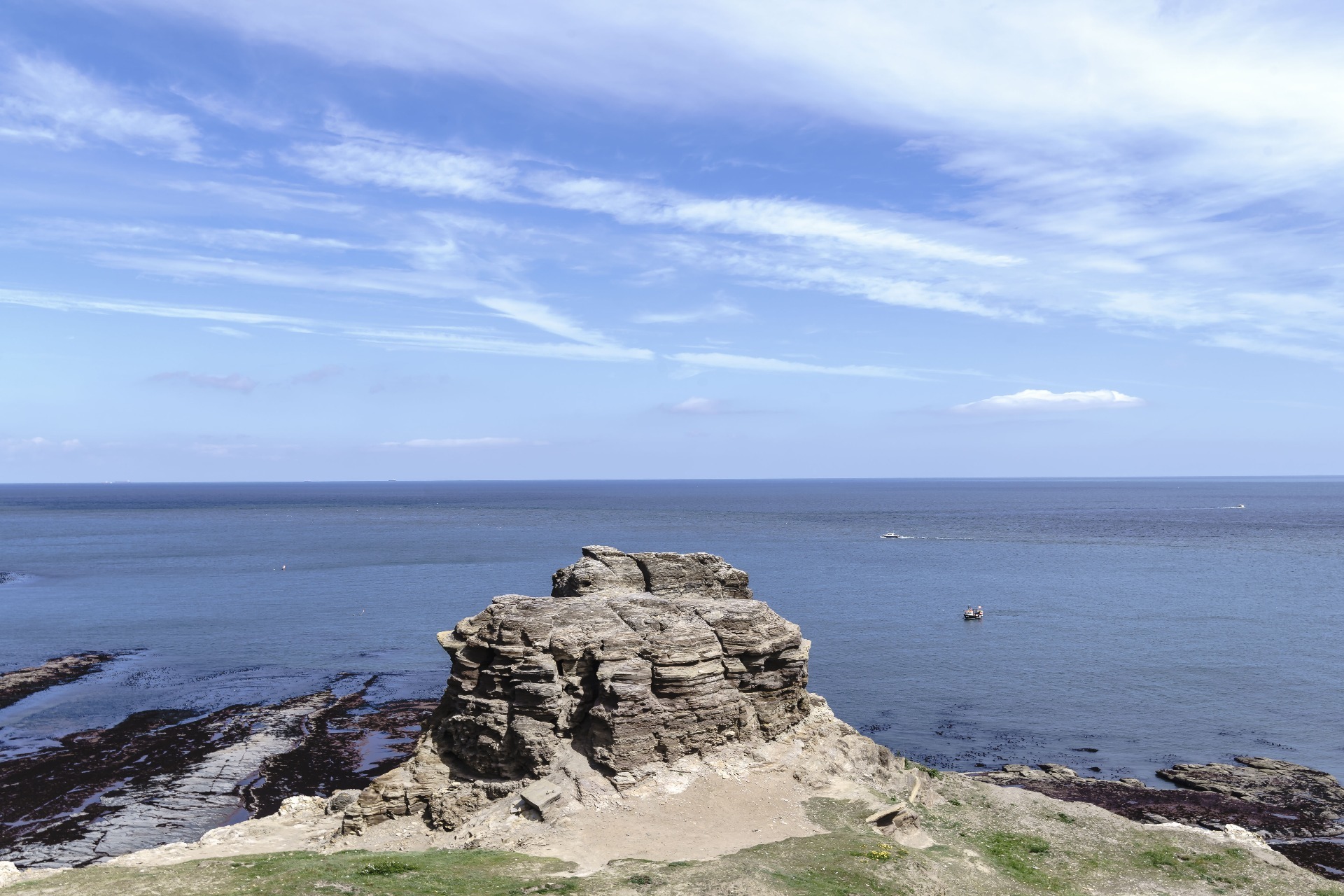 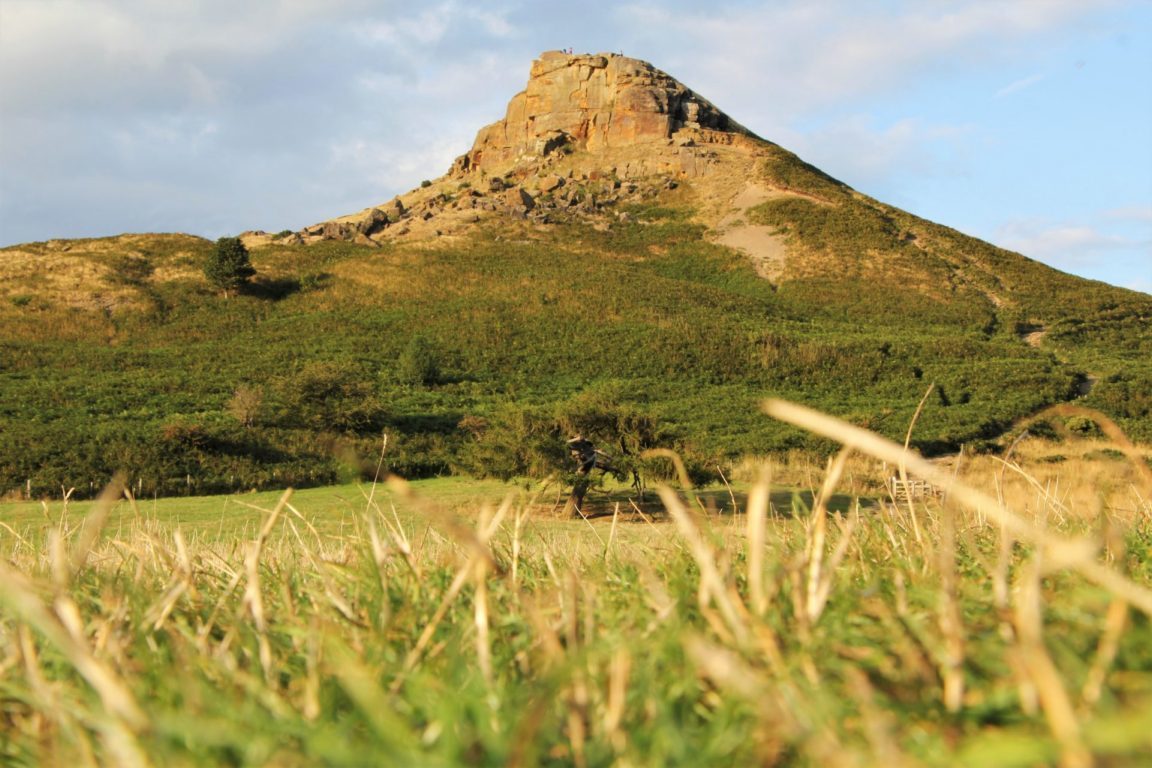 Weather
We couldn’t have been more fortunate with the weather, the conditions really were ideal. During the day it was mostly warm with a slight breeze, at one point in the morning it was a little too hot, luckily I had written an extensive evidence based article on training in hot weather just a few weeks before this run, so I knew exactly what to do, and then just ignored it.
I ran way too fast early on, became extremely dehydrated, and had to literally take a time out at Sandsend (thirty six miles in) to compose myself, at this checkpoint I felt so completely flat, dizzy, sick and worn out that I was unable to speak and a marshal with a worried look on their face asked me if I was going to be OK. I poured a bottle of water over my head, took a moment to compose myself and set off at a more sensible pace.
When you're on the move the best field indicator of your hydration status is urine, however I was so dehydrated I was unable to go for a piss, when I did eventually go, about forty miles in, I emitted an orange trickle which told me that even after gulping down litres of water with a little salt, I still hadn’t managed to get myself in full order. It was probably another ten miles or so before I felt my strength coming back to me.
When it did rain during the day, I got completely soaked, and this led to me getting various friction burns along my arms, I was tempted to change T shirts at the next check point (CP) however a good smothering of Vaseline seemed to sort it.
During the evening, we were all fortunate with the low wind, a few weeks before I had walked a section of the moors with my wife and dog, and the strong winds meant we couldn’t hear each other speak and were getting blown around the tops of the hills as we tried to press on. I had envisioned that the race was going to be a real struggle when it came to this section, but as it happened it was really quite and my pace runner Kev and I had a good chat as we made our way across various paths, rocks and hills.
Support
So far I’ve had a one man support crew on both my ultra runs, and it really makes a difference. Last time my friend Adam was invaluable on the Wolds way in providing me with food, drink and encouragement every step of the way, and he was due to do the same on the Cleveland way however he was unfortunate with car trouble so was regrettably unable to make it. Luckily however I had Will, who drove ahead to every checkpoint and wherever possible between check points along the way. He was up early to pick me up at 6am on the Saturday, and barely got any rest or sleep until he drove me home at 9am the next day.
Will sorted me out with food, even cooking up a decent gnocchi for me at Saltend just before I was about to set off inland, he also provided regular updates on our social media feed, he gave Kev a lift back to the Car Park where he first met me, and he even ran some sections with me. What ever success I achieved with this event would not have been possible without him. 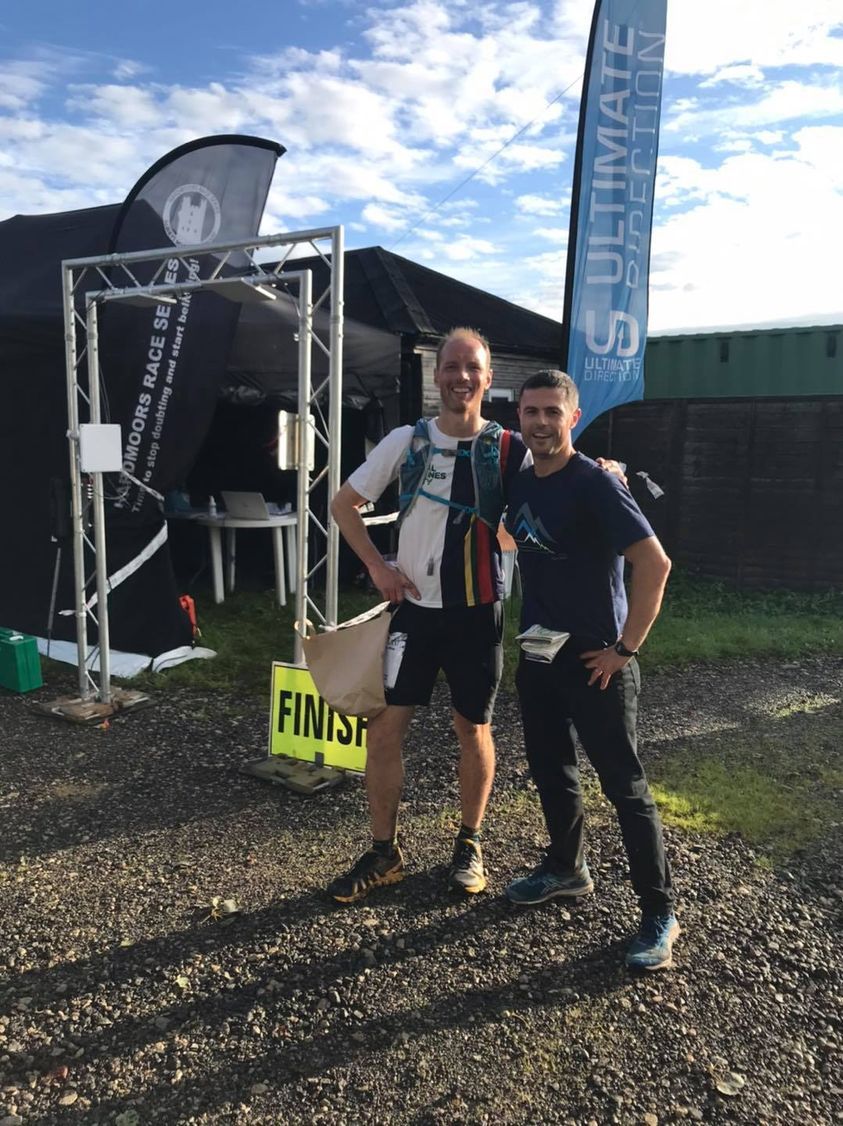 Looking ahead I now want to enter the Hardmoors 160 next year, with the goal of improving on my performance and hopefully finishing in a higher position. I plan to run some smaller events between now and then to practice different tactics and try to hone the skills needed to perform better.
The thing I like most about Ultra running, is that at thirty-nine years old I feel like a competitive athlete, which stops me from feeling old, and helps me appreciate my health and wellbeing more.
After the run I spent the next week on a lovely family break in Cornwall, plenty of swimming, bodyboarding and long walks saw me feeling well recovered within about four days, I even managed a few short distance runs. From now till Christmas I’ll keep some running in my training plan, but will mostly be concentrating on weights, I’ve allowed certain clients to bench more than me these past months and its time to get caught up and make amends!. 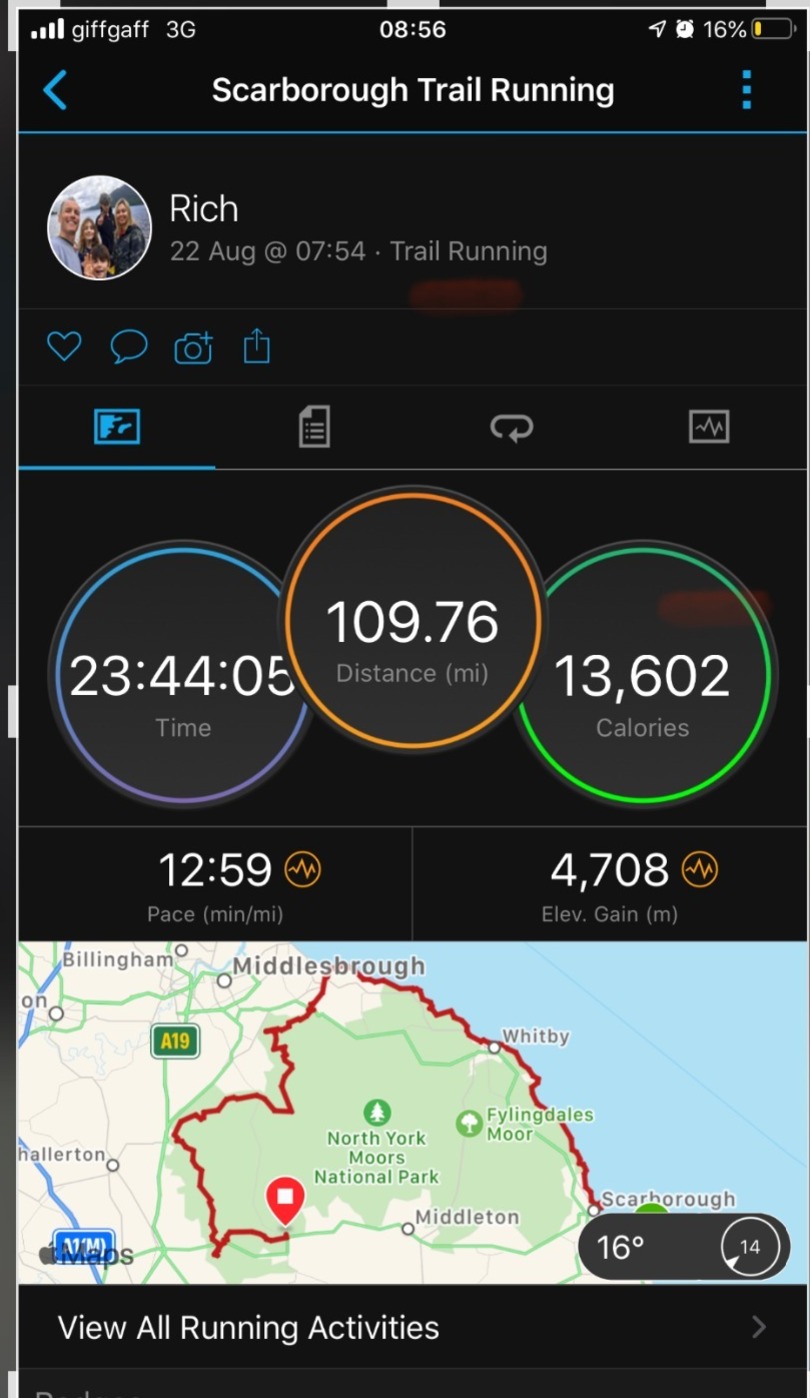 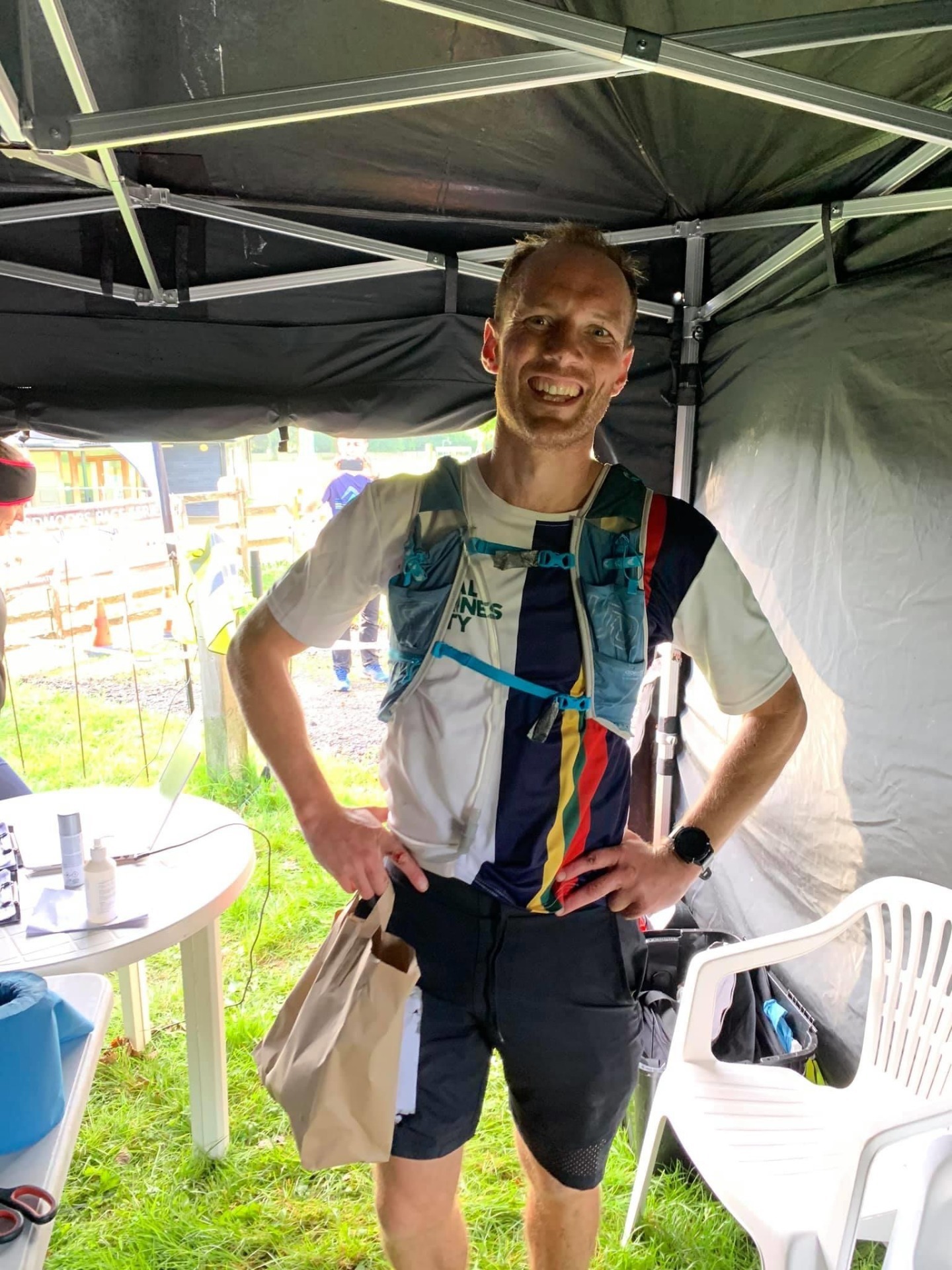 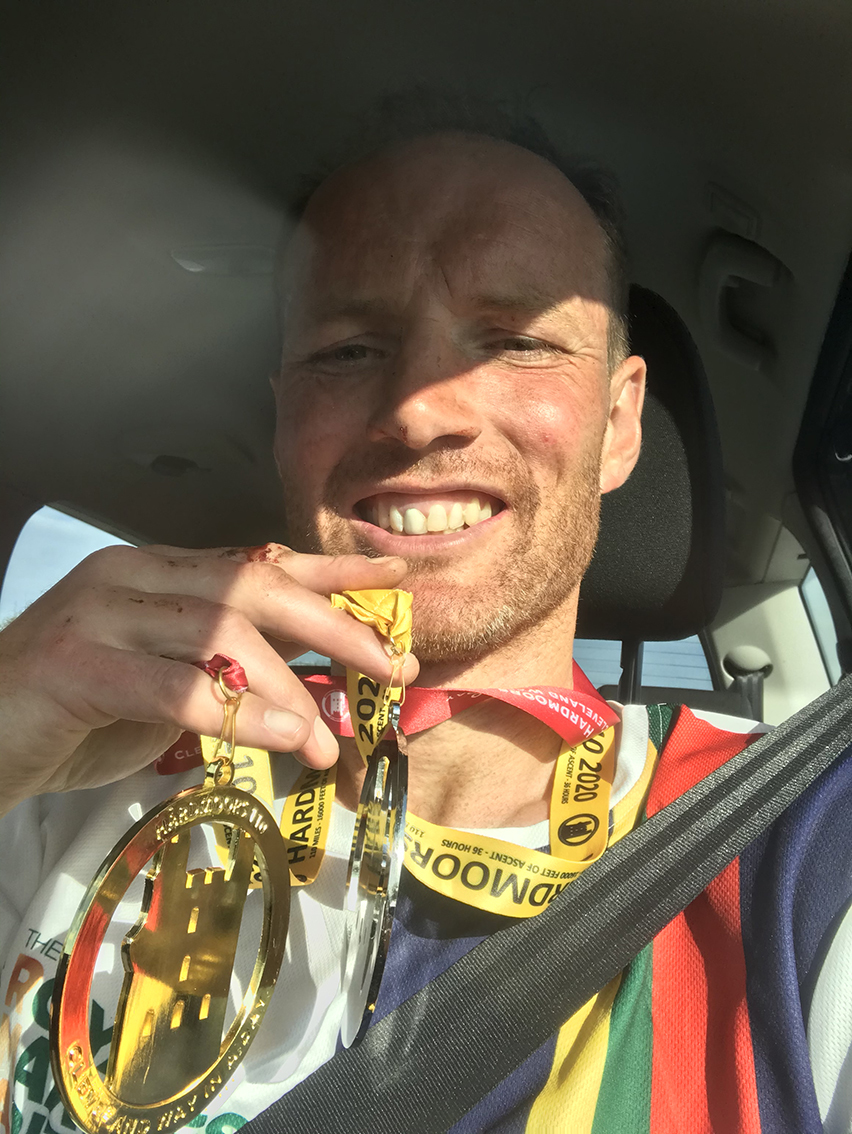